Walter Meier, the parent company of Jet, Powermatic, and Wilton tools is selling off their tool division. Seems like the large Swiss conglomerate has other, more profitable core businesses to focus on.

As announced in The Tennessean:

With about 200 employees worldwide, Walter Meier Manufacturing Inc. makes and markets the Wilton, Jet and Powermatic tool brands through more than 3,000 outlets in about 30 markets. It has been part of Walter Meier AG, whose main business is climate-control and humidification equipment.

No purchase price has been divulged yet as the deal is still being finalized, said Bob Varzino, the tool company’s senior vice president for marketing at the La Vergne headquarters and distribution center, which has 126 employees.

But the sale is “very good news for us,” Varzino said.

“It was some time in the coming,” he said. “This company has been growing and has become a very profitable division for Walter Meier. This will capitalize the company so it can grow to its next level of evolution. Tenex focuses on industrial brands and will be a really good partner for us. This is its biggest acquisition.”

In an announcement on its global website, Walter Meier AG said it was divesting itself of the tools business to continue with its “strategy of focusing on the core business (of) climate technology.”

Tenex won the right to buy the tool division through an auction, and the closing of the deal “is subject to various conditions, including contracts to be signed with financial lenders,” Walter Meier AG said. The sale is expected to be completed by Oct. 31.

Tools sold by the division are used in professional woodworking, metalworking, fabrication and industrial maintenance shops. The tool company has operations in seven countries, including Germany, Taiwan, Switzerland, Russia and France.

The company’s products are made in factories in Chicago, Mexico and Asia, Varzino said.

“In Walter Meier tools, we have acquired a strong company with great brands and a growing market share in each of its segments,” Tenex Chief Executive Officer Michael Green said in a statement. “The well-recognized brands of Jet, Wilton and Powermatic define the resilience and durability of the products. We look forward to supporting the company and its management team in executing its continuing growth initiatives.”

Well, according to this and what I heard in Nashville in August, it appears that Jet and Powermatic won’t be going away soon. In fact, keep looking for new and improved woodworking tools from them. 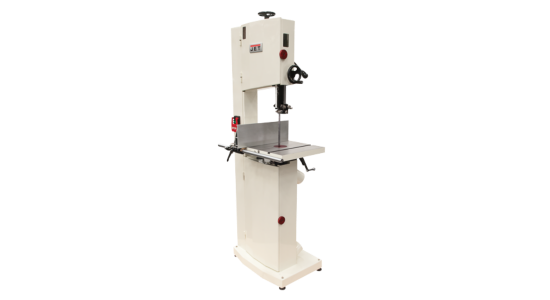 I had an opportunity recently to visit with JET/Powermatic in Nashville, Tennessee. They introduced a few new tools: Powermatic PM1000 Table Saw, JET 14″ Steel Frame Band Saw, and soon to come, a 10″ low-speed bench grinder and a couple of new midi lathes.

But what was most interesting was a chat I had with their engineer, Barry. He said that from a design perspective, they’re really paying attention to details and a potential buyer’s first impressions. He reiterated what others in the product design industry have noted: Your decision to buy or not to buy a product is really made within the first few seconds of seeing it.

JET tools are made overseas in Taiwan. Most manufacturers are content to paint the castings their company color right out of the foundry and call it “done.” JET is raising the bar by really paying attention to detail and aesthetics of their products. For example, he said that by simply spending $5 more for a quality metal knob instead of a cheap plastic knob can increase the perceived value of a tool by $100. That’s pretty impressive.

They’re also looking at the overall design and visual appeal of the tools in addition to their function and features. The 14″ band saw pictured here is one example. There are no exposed fasteners as you look at the front of the saw. The doors have pleasing curves rather than the bland square features of other saws. They’re little things but I have to agree that they leave a positive impression of the quality of the tool.

And JET isn’t forgetting about how well the tool works and functions. They’re paying attention to details that make a difference in how the tool performs. One striking example is as simple as the location of the dust ports on the new band saw. They’re located to catch the majority of sawdust before gumming up the tires on the wheels.

Finally, I learned that JET will be targeting a younger audience with its upbeat advertisements. They’re also tweaking the design of the JET logo and will be experimenting with the trademark white paint color. All in all, JET/Powermatic is investing heavily in the woodworking market and I’m very interested to see how they revamp their product lines in the coming months and years.

We are a participant in the Amazon Services LLC Associates Program, an affiliate advertising program designed to provide a means for us to earn fees by linking to Amazon.com and affiliated sites.